Lords of Life - A History of The Kings of Thailand 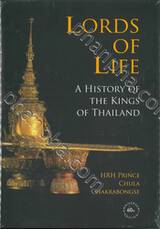 HRH Prince Chula Chakrabongse, well known in his lifetime as an author and
broadcaster, was in a uniquely favourable position for writing the history of the
Royal House of Chakri, the current Thai royal dynasty. He had access to unpublished
royal letters, archives and documents of all kinds and, as a grandson of
King Chulalongkorn, he had personal knowledge of many of the leading figures in
his story. Therefore he was able to give an authoritative and quite fascinating
account of the monarchs who were the absolute rulers of Siam for 150 years,
who re-established Thai culture and the Buddhist religion after the fall of
Ayutthaya and, through skilful diplomacy, preserved Siamese autonomy at a time
when her neighbours were giving way before the spread of  Western imperialism.

Sixty years after it was first published, this revised edition preserves
Prince Chula’s text and footnotes in their entirety,
but has an afterword by B. J. Terwiel and a wealth of archive photographs.